Qualitites
Prosperous
The settlement is a popular hub for trade. Merchants are wealthy and the citizens live well.

Increase Economy +1; Increase Base Value by 30%; Increase Purchase Limit by 50%

Strategic Location
The settlement sits at an important crossroads or alongside a deepwater port, or it serves as a barrier to a pass or bridge. (Economy +1; increase base value by 10%)

The settlement hosts a shrine, temple, or landmark with great significance to one or more religions. The settlement has a higher percentage of divine spellcasters in its population. (Corruption –2; increase spellcasting by 2 levels

Ruler
The Ruler is the highest-ranking person in the kingdom,
above even the other kingdom leaders, and is expected to
embody the values of the kingdom. The Ruler performs
the kingdom’s most important ceremonies (such as
knighting royals and signing treaties), is the kingdom’s
chief diplomatic officer (though most of these duties are
handled by the Grand Diplomat), is the signatory for all
laws affecting the entire kingdom, pardons criminals when
appropriate, and is responsible for appointing characters
to all other high positions in the government (such as other
leadership roles, mayors of settlements, and judges
Benefit: Choose one kingdom attribute (Economy,
Loyalty, or Stability). Add your Charisma modif ier to
this attribute. If your kingdom’s Size is 26–100, choose
a second kingdom attribute and add your Charisma
modifier to it as well. If your kingdom’s Size is 101 or
more, choose a third kingdom attribute and add your
Charisma modifier to it too.
If you have the Leadership feat, the bonus from the feat
applies to all kingdom attributes you affect (one, two, or
three attributes, depending on the kingdom’s Size).
If you marry someone of equal station, you both can act
as Ruler. You both add your Charisma modifiers to the
kingdom attribute (or attributes, if the kingdom is large
enough). As long as one of you is present for 1 week per
month, you avoid the vacancy penalty.
In a typical campaign where the kingdom leaders have
no ties to actual nobility, “someone of equal station” is
irrelevant and your marriage is between two Rulers. In a
campaign where the leaders are nobles or royals, marrying
someone of lesser station means the spouse becomes a
Consort rather than a Ruler.
Vacancy Penalty: A kingdom without a ruler cannot
claim new hexes, create Farms, build Roads, or purchase
settlement districts. Unrest increases by 4 during the
kingdom’s Upkeep phase.

Councilor
The Councilor acts as a liaison between the citizenry and
the other kingdom leaders, parsing requests from the
commonwealth and presenting the leaders’ proclamations
to the people in understandable ways. It is the Councilor’s
responsibility to make sure the Ruler is making decisions
that benefit the kingdom’s communities and its citizens.
Benefit: Add your Charisma modif ier or Wisdom
modifier to Loyalty.
Vacancy Penalty: Loyalty decreases by 2.
The kingdom gains no benefits
from the Holiday edict (see page
208). During the Upkeep phase,
Unrest increases by 1.

General
The General is the highest-ranking member of the
kingdom’s military. If the kingdom has an army and
a navy, the heads of those organizations report to the
kingdom’s General. The General is responsible for
looking after the needs of the military and directing the
kingdom’s armies in times of war. Most citizens see the
General as a protector and patriot.
Benefit: Add your Charisma modif ier or Strength
modifier to Stability.
Vacancy Penalty: Loyalty decreases by 4.

Heir
The Heir is usually the Ruler’s eldest son or daughter,
though some kingdoms may designate a signif icant
advisor (such as a seneschal) as Heir. The Heir’s time
is mostly spent learning to become a ruler—pursuing
academic and martial training, touring the kingdom to
get to the know the land and its people, experiencing the
intrigues of courtly life, and so on.
Because the Heir carries the potential of being the next
Ruler, the Heir’s role is similar to the Consort in that the
Heir may act on behalf of the Ruler.
Benefit: Add half your Charisma modifier to Loyalty.
You may act as the Ruler for a turn, negating the
vacancy penalty for the kingdom having no
Ruler, though you do not gain the Ruler benefit.
Whenever you act as the Ruler for the turn,
you must succeed at a Loyalty check during
the kingdom’s Upkeep phase or Unrest
increases by 1.
Vacancy Penalty: None

High Priest
The High Priest tends to the
kingdom’s religious needs and
guides its growth. If the kingdom
has an official religion, the High
Priest may also be the highestranking
member of that religion
in the kingdom, and has similar
responsibilities over the lesser
priests of that faith to those the Grand Diplomat has
over the kingdom’s ambassadors and diplomats. If the
kingdom has no official religion, the High Priest may be a
representative of the most popular religion in the kingdom
or a neutral party representing the interests of all religions
allowed by the kingdom.
Benefit: Add your Charisma modif ier or Wisdom
modifier to Stability.
Vacancy Penalty: Stability and Loyalty decrease by 2.
During the Upkeep phase, Unrest increases by 1.

Magister
The Magister guides the kingdom’s higher learning and
magic, promoting education and knowledge among the
citizens and representing the interests of magic, science,
and academia. In most kingdoms, the Magister is a sage,
a wizard, or a priest of a deity of knowledge, and oversees
the governmental bureaucracy except regarding finance.
Benefit: Add your Charisma modifier or Intelligence
modifier to Economy.
Vacancy Penalty: Economy decreases by 4.

Marshal
The Marshal ensures that the kingdom’s laws are being
enforced in the remote parts of the kingdom as well as in
the vicinity of the capital. The Marshal is also responsible
for securing the kingdom’s borders. He organizes regular
patrols and works with the General to respond to threats
that militias and adventurers can’t deal with alone.
Benefit: Add your Dexterity modifier or Wisdom
modifier to Economy.
Vacancy Penalty: Economy decreases by 4.

Spymaster
The Spymaster observes the
kingdom’s criminal elements
and underworld and spies on
other kingdoms. The Spymaster
always has a finger on the pulse of the
kingdom’s underbelly, and uses acquired
information to protect the interests of the
kingdom at home and elsewhere through a
network of spies and informants.
Benefit: During the Edict phase, choose
one kingdom attribute (Economy, Loyalty or
Stability). Add your Dexterity modifier or
Intelligence modifier to this attribute.
Vacancy Penalty: Economy decreases
by 4. During the Upkeep phase, Unrest
increases by 1.

Treasurer
The Treasurer monitors the state of the
kingdom’s Treasury and citizens’ confidence in
the value of their money and investigates
whether any businesses are taking unfair
advantage of the system. The Treasurer is
in charge of the tax collectors and tracks debts and credits
with guilds and other governments.
Benefit: Add your Intelligence modifier or Wisdom
modifier to Economy.
Vacancy Penalty: Economy decreases by 4. The kingdom
cannot collect taxes—during the Edict phase, when you
would normally collect taxes, the kingdom does not collect
taxes at all and the taxation level is considered “none.”

Warden
The Warden is responsible for enforcing laws in larger
settlements, as well as ensuring the safety of the kingdom
leaders. The Warden also works with the General to deploy
forces to protect settlements and react to internal threats.
Benefit: Add your Constitution modifier or Strength
modifier to Loyalty.
Vacancy Penalty: Loyalty and Stability decrease by 2.

Corruption Corruption measures how open a settlement’s officials are to bribes, how honest its citizens are, and how likely anyone in town is to report a crime. Low corruption indicates a high level of civic honesty. A settlement’s corruption modifies all Bluff checks made against city officials or guards and all Stealth checks made outside (but not inside buildings or underground).

Economy A settlement’s economy modifier indicates the health of its trade and the wealth of its successful citizens. A low economy modifier doesn’t automatically mean the town is beset with poverty—it could merely indicate A town with little trade or one that is relatively self-sufficient. Towns with high economy modifiers always have large markets and many shops. A settlement’s economy helps its citizens make money, and thus it applies as a modifier on all Craft, Perform, and Profession checks made to generate income.

Law Law measures how strict a settlement’s laws and edicts are. A settlement with a low law modifier isn’t necessarily crime-ridden—in fact, A low law modifier usually indicates that the town simply has little need for protection since crime is so rare. A high law modifier means the settlement’s guards are particularly alert, vigilant, and well-organized. The more lawful A town is, the more timidly its citizens tend to respond to shows of force. A settlement’s law modifier applies on Intimidate checks made to force an opponent to act friendly, Diplomacy checks against government officials, or Diplomacy checks made to call on the city guard (see sidebar). 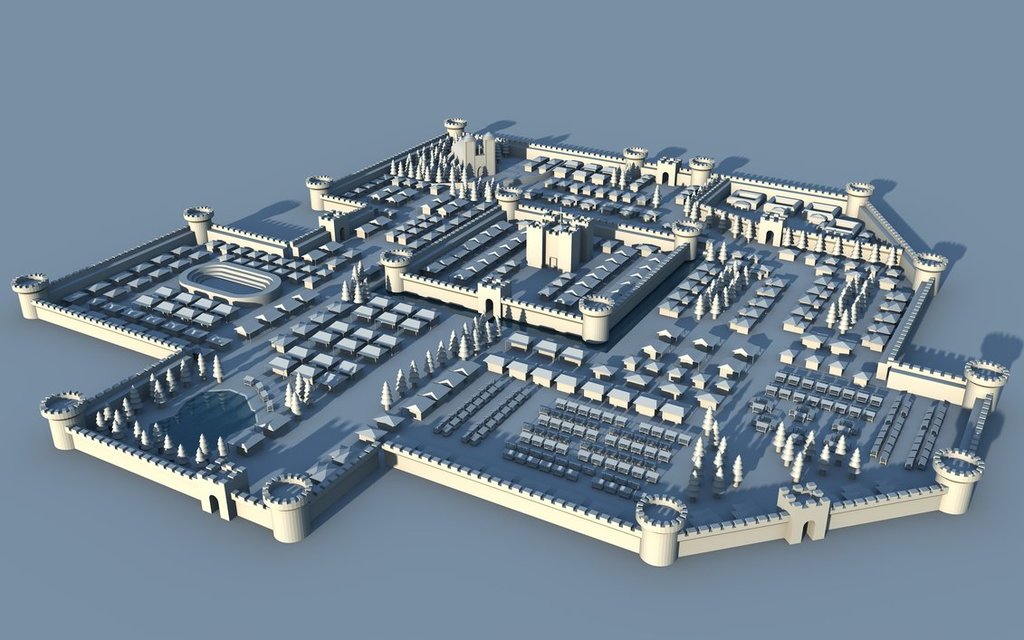